8. Excellence End to End: 10 Maxims for Impact and Effectiveness

Eighth in a series of ten maxims I’ve cultivated and use regularly to enhance business.

Like this Mobius strip, Excellence End to End is a 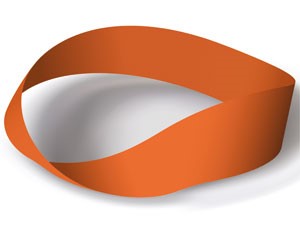 Awhile ago I worked with a company that offered some of the highest quality services in their industry – arguably the best in their geographic area. They knew their field inside and out, they had a commitment to excellence second to none, and they were adamant about doing it not only right, but better than anyone else. Great people.

And they were slowly but surely losing customers and market share.

Here’s one thing we figured out: their focus on excellence was all about the service delivery itself – but they needed to pay more attention to Excellence End to End.

Excellence End to End means putting energy and effort into more than just providing a great product or service. It means Excellence from before the point of first contact with a client or customer, all the way through to after you’re done with the current project, however small or large.

How do you show Excellence at the front End – before your first point of contact?

And in the middle?

In your own business, you know what it means to show Excellence during the course of a project or engagement – or you wouldn’t be in that business. Suffice it to say that Excellence on the Ends only holds up if the “middle” – the core of what you offer/provide/sell – meets the level of Excellence that you promise to the market you serve.  A VUCA Prime Mindset keeps you in the game.

How do you keep showing Excellence at the other End – after completing a client project?

Excellence End to End is a mindset, a practice, and a worthy goal. And I’ve seen it boost impact and effectiveness, for my own company and others we’ve worked with.

Check out our previously-posted Maxims for Impact and Effectiveness, all of which I find myself repeating often. I hope they resonate with you as they do with scores of business owners and leaders we have coached, advised, or otherwise helped. Watch this space for numbers 9-10 – coming soon!

Want to see more of what we think and talk about at TPG Companies?
Click the “Follow” button to receive new posts as soon as they’re published.

For over 35 years, Paul J. Kirpes, Founder and President of TPG Companies, has transformed businesses, corporations, communities, and ventures in the private and public sectors throughout the U.S. as well as internationally. Paul empowers companies, their owners, and leaders to Transform, Perform and Grow!
View all posts by Paul Kirpes, TPG Companies →
This entry was posted in Strategy and tagged Business Strategy, Effectiveness, Excellence, Impact, maxims, Principled Approach. Bookmark the permalink.